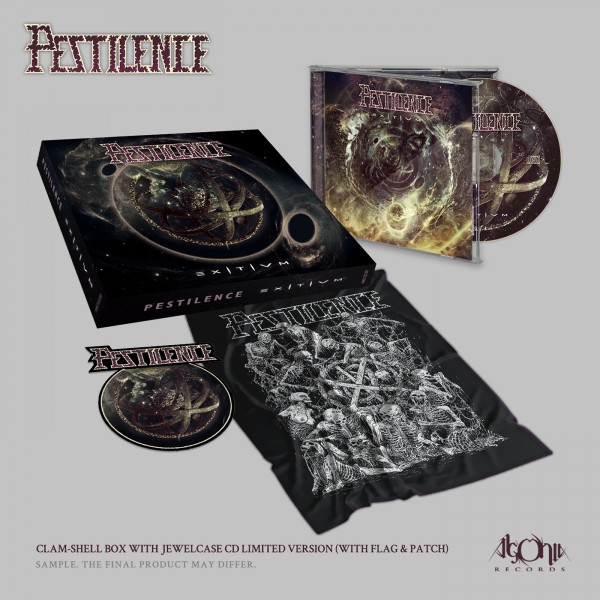 A new album, on a new label armed with a whole new line-up and a new dynamic: no matter what, PESTILENCE or more specifically their maestro Patrizio Mameli are like the phoenix, rising from the ashes, over and over again. Three years after ‘Hadeon’, the band and their totally revamped line-up – besides former Dew Scented and Creepmime Joost van der Graaf on bass and Bleeding Gods’ Rutger van Noordenburg on lead guitar, former God Dethroned Michiel van der Plicht joined on drums last year – not only prove to be worthy of its golden legacy but actually deliver with ‘Exitivm’ what is probably their best incarnation in over a decade, with the kind of instantly recognizable sound that will immediately make all ‘Testimony Of The Ancients’ fans drooling with anticipation while proving they’re not a nostalgia act but are living in the now.

Recorded over two months last summer and armed with the crispiest production they’ve ever had, their ninth full-length is titled ‘Exitivm’ for a reason. Meaning ‘brutal destruction’ in Latin, those ten new tracks (plus one intro and one outro) are brutal yet progressive, drenched in a sci-fi atmosphere and transfigured by Mameli luminous solo work and subtle keyboards layers. Both a reinvention and a confirmation of everything the band has been standing for since 1986, thirty-five years later PESTILENCE are more than ever exploring the further outposts of the extreme metal sound on ‘Exitivm’.