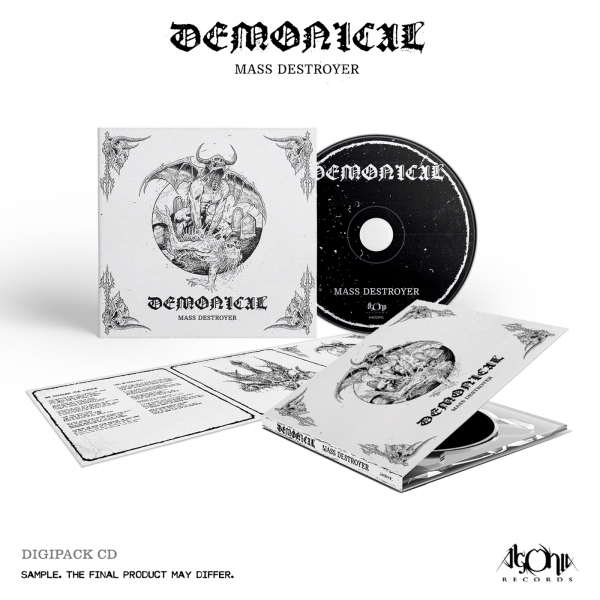 With the emergence of the immediate successor to "World Domination", the seasoned old-school death-dealers return to their customary record & release schedule, which governs nearly every major output of their demonic catalog. Instead of facing the trails and tribulations of a long creative process, the band indulged in a burst of creativity which followed the release of their antecedent offering, and with expertise worthy of death metal veterans, shaped it into "Mass Destroyer".

"A huge inspirational boost hit us so why waste time and wait? Just hammer while the metal is hot," explains the band, as to what seems to be a tried and true process, that already preceded "Hellsworn" (2009), "Death Infernal" (2011) and "Darkness Unbound" (2013). Musically, "Mass Destroyer" keeps to the Swede's HM2-beaten track, but promises a few twists. "The outcome is here, our seventh full-length and another vicious Demonical assault of Stockholm-style death metal madness and beyond," the band comments. "Once again and as always, we wanted to crawl back in time and explore the early days of death metal but with traces and hints of various other metallic subgenres."

What better way to emphasize a ghastly and dusty death metal setting, than adorning it with an old-fashioned packaging and providing real, organic sounding. Mark Riddick (Absu, Arsis) added his gruesome touch to "Mass Destroyer" in designing the fiendish cover artwork. Glashuset and Sellnoise Studios were used for recording with Johan Hjelm and Jonas Arnberg behind the helm, while Karl Daniel Liden mixed and mastered the album at his Tri-Lamb Studios. "We worked with the same production team as last time and the result turned out nothing but great," the band continues. "A dynamic and breathing album we all feel very satisfied and proud off. Can’t wait to destroy the masses!"